In San Francisco last Friday. It was bit rusty, but something about it was just right, like the poor old uncle of a Harley… 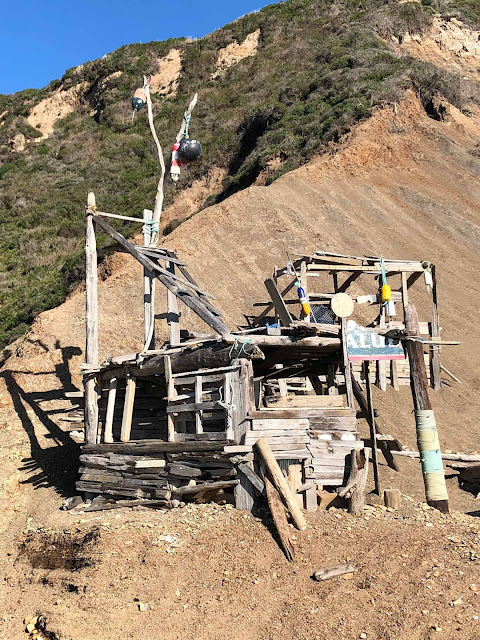 On the Beach Reincarnation of the Whalebone Saloon, built a few years ago by Sean Hellfritsch and friends on a remote beach. It’s at the base of a free-flowing creek that empties on to the beach, and has prolific watercress.
Yesterday was a beautiful beach day, the calm before a week (hallelujah!) of storms and rains. I lay in the sun, ran a bit, jumped in the water, right back out — brrr! Very few people on beach, one guy had a beautiful black piece of whale baleen he’d found. Later I came across what must have been a 25′-long whale rib, awesome to ponder the size of a creature with a rib of this size. This one, that had washed ashore in May, was a 79′ blue whale.

Friday Morning Fish Fry
Got up at 6, navigated the road work on Highway One (monstrous project), got latte and cinnamon roll at Equator Coffee in Mill Valley (I’m kinda devastated that Cafe Roma is closed (after 29 years in North Beach), am looking for another good coffee shop in SFO where I can work on my computer early in the morning — suggestions welcome…Got to the cove at Aquatic Park about 9, swam about 10 minutes, water was 51 degrees (another swimmer told me). It always encouraging to see other swimmers there from the South End Rowing Club and The Dolphins Club, no stinkin wetsuits, a hat being the only acceptable cold water wear; it’s painful for me the first minute or 2, but at about 3 minutes, the body adjusts and by the time I’ve been in 6 minutes, I’m not feeling bad. Got to get out before 20 minutes or so, I’ve found,  or hypothermia will begin. But the rush you get once out is worth the little bit of pain. Then over to the Buena Vista Cafe for an Irish Coffee; what a way to start the day!
The Next Book
Since I decided to put my book on the ’60s online, instead of as a regular book, I’ve been working on my Half Acre Homestead book. It’s like time travel, going back to 1973 or so, documenting the building of the house and outbuildings, developing the garden, dealing with chickens, bees and goats, the tools we’ve settled on. As I work on it, listing tools, techniques, things that have worked, those that haven’t. I’ll publish an outline of the book in the next post or two. 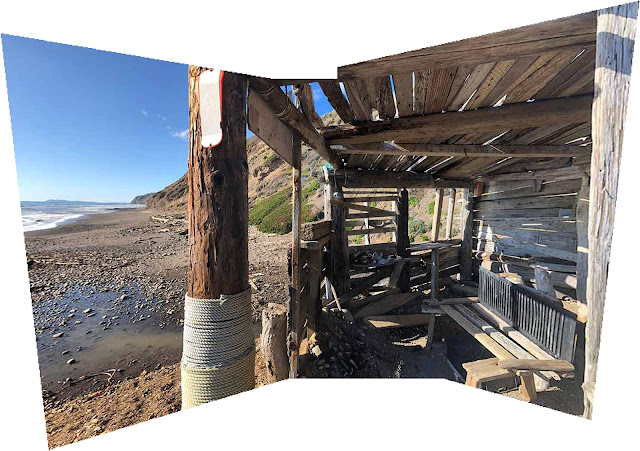 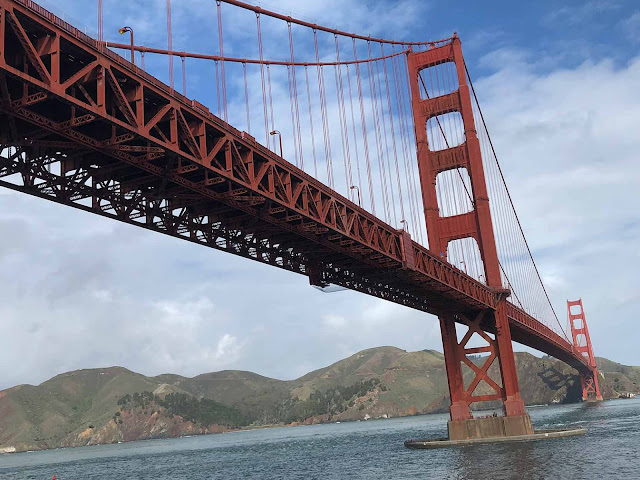 From the top story of Fort Point, looking towards the hills of Marin. Click on photo to enlarge.

Note: Click on this image to get a much larger pic.
I often go under the bridge to check the waves. On Friday, they were hitting the seawall, with spray flying. I started talking to a park ranger, and he  told me to go inside the fort, and up to the top (four stories, cast iron staircases).
I grew up in San Francisco, I’ve been down there dozens of times, and I never knew you could go inside the fort. It’s an amazing building, built in 1853-1861. It’s open Friday, Saturday, Sunday, and well worth a visit. I’ll post more photos in coming days. This was a thrill.

“…Following the United States’ victory in 1848, California was annexed by the U.S. and became a state in 1850. The gold rush of 1849 had caused rapid settlement of the area, which was recognized as commercially and strategically valuable to the United States. Military officials soon recommended a series of fortifications to secure San Francisco Bay. Coastal defenses were built at Alcatraz Island, Fort Mason, and Fort Point.
The U.S. Army Corps of Engineers began work on Fort Point in 1853. Plans specified that the lowest tier of artillery be as close as possible to water level so cannonballs could ricochet across the water’s surface to hit enemy ships at the water-line.[4] Workers blasted the 90-foot (27 m) cliff down to 15 feet (4.6 m) above sea level. The structure featured seven-foot-thick walls and multi-tiered casemated construction typical of Third System forts. It was sited to defend the maximum amount of harbor area. While there were more than 30 such forts on the East Coast, Fort Point was the only one on the West Coast. In 1854 Inspector General Joseph K. Mansfield declared “this point as the key to the whole Pacific Coast…and it should receive untiring exertions”.
A crew of 200, many unemployed miners, labored for eight years on the fort. In 1861, with war looming, the army mounted the fort’s first cannon. Colonel Albert Sidney Johnston, commander of the Department of the Pacific, prepared Bay Area defenses and ordered in the first troops to the fort. Kentucky-born Johnston then resigned his commission to join the Confederate Army; he was killed at the Battle of Shiloh in 1862.…”
Tags: building, ocean
Post a comment (1 comment)

This got built in about an hour at the Concrete Boat pier south of Santa Cruz last week.